Felicia Day is a professional actress who has appeared in numerous mainstream television shows and films, including “Buffy”, “Eureka” and ”Supernatural”.  She currently stars in the revival of “Mystery Science Theatre 3000” on Netflix, as well as voices characters on animated shows such as “Miles of Tomorrowland”, “Stretch Armstrong” and “Skylanders” to name a few.

However, Felicia is best known for her work in the web video world, behind and in front of the camera. She co-starred in Joss Whedon’s Internet musical “Dr. Horrible’s Sing-Along Blog,” which won an Emmy in 2009. She also created and starred in the groundbreaking web series “The Guild”. It won numerous awards for web video excellence over its six seasons. Felicia expanded the show into numerous merchandizing opportunities, including a hit comic book series with Dark Horse Comics. Coinciding with the recent 10th anniversary, several props and costumes from the show were recently accepted into the Smithsonian Museum’s permanent collection.

Felicia’s production company Knights of Good also produced the innovative web series “Dragon Age” in conjunction with EA/Bioware in 2011 and in 2012 she created an online media company called Geek & Sundry. Since launching in April 2012, the company’s YouTube channel has garnered over 1.6 million subscribers and the Twitch channel over 30k subscribers, one of the highest on that live streaming platform. In 2014, the company was sold to Legendary Entertainment. Felicia continues to work as creative chief officer with her company, as well as develop television and web projects for her to write, produce and star in. 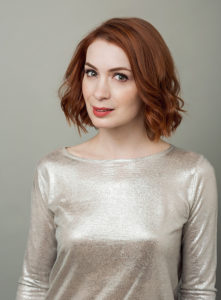