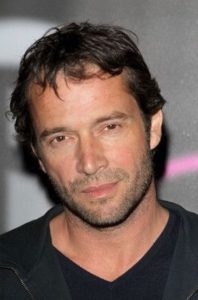 James Purefoy is best known for playing Mark Antony in the award-winning HBO series Rome (2007/8)
and as Joe Carroll in the acclaimed series The Following (2012-2015) opposite Kevin Bacon. Other credits
include his role of Michael Connor in Equity (2016), King George VI in Churchill (2017) opposite Brian Cox
and Pangbourne in High-Rise (2015) the feature adaptation of the classic JG Ballard novel, directed by
Ben Wheatley opposite Sienna Miller, Tom Hiddleston and Jeremy Irons. He is currently starring as Hap in
Hap & Leonard for Sundance TV as well as playing Laurens Bancroft in Altered Carbon, the sci-fi
blockbuster, for Netflix.

Other prominent film credits include starring in the first installment of Resident Evil (2002),  playing Rawdon Crawley
in Mira Nair’s Vanity Fair (2004) opposite Reese Witherspoon and also Edward, the Black Prince, in A Knight’s Tale (2001)
alongside Heath Ledger.

He joined the Royal Shakespeare Company in his final year at the Central School of Speech and Drama and spent
six years in lead roles in the UK theatre. He last starred on stage in FlarePath opposite Sienna Miller at the Haymarket
Theatre directed by Trevor Nunn.